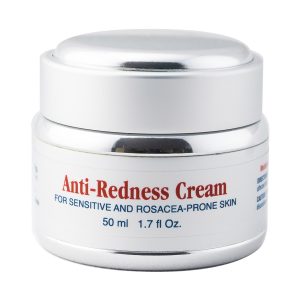 Anti-Redness Cream for Sensitive and Rosacea-Prone Skin calms, moisturizes and soothes reddened skin caused from a variety of factors.

Studies show approximately 60 % of women and 40 % of men regard their skin as sensitive, making the market for products for sensitive skin very large as the problem affects a good percentage of the population. People with sensitive skin have a tendency toward the reddened skin. Anti-Redness Cream for Sensitive and Rosacea-Prone Skin targets reddened skin

Anti-Redness Cream for Sensitive and Rosacea-Prone Skin contains a combination of two key natural ingredients: Defensil®-Plus and Canadian Willowherb™ Extract, each having excellent clinical references for reducing the appearance of reddened skin.

Defensil®-Plus – In a European cosmetics competition in 2013 Defensil®-Plus won 1st place (the BSB Innovation Prize) in the Category of most innovative natural products. Defensil®-Plus is Ecocert and Cosmos approved and certified by NaTRUE. Defensil®- Plus is comprised of a combination of a number of natural ingredients such as Blackcurrant Seed Oil, Balloon Vine Extract, and Sunflower Oil and extract. Each component has been thoroughly investigated for its roll in reducing redness and calming the skin. A detailed clinical information presentation about Defensil®-Plus is available upon request.

Below is an example of the benefit of Defensil®-Plus for Rosacea-prone skin:

Below is a study showing how Canadian Willowherb™ reduces redness caused by a chemical irritation better than hydrocortisone:

Canadian Willowherb™ reduces skin redness within 30 minutes of use and has better results than the reference anti-irritant agent hydrocortisone.

Bring Your Own Packaging

We stock a nice but limited choice of packaging options out of the multitude of possible packaging containers available. Some clients provide their own packaging components from their chosen packaging supplier. Minimums start at around 500 units when we fill our products into client provided packaging.

Bring Your Own Packing

Once your order is complete, we work with a global logistics company to arrange the best and most economical shipping method depending upon order size/weight, destination location, and speed at which the order is required. For US bound orders there are no taxes or duties because of the NAFTA (North American Free Trade Agreement)

Most of our stock formula products are available in bulk, packaged in 20 kg. pails. This is a 44 lb. pail or more commonly known as a 5-gallon pail. Two of our most popular products supplied in bulk are Vitamin C Serum and hyaluronic acid Serum.

Apply as needed onto affected skin.

Most of our stock formula products are available in bulk, packaged in 20 kg. pails. This is a 44 lb. pail or more commonly known as a 5-gallon pail. Purchasing products in bulk will satisfy those clients who wish to customize products by adding unique and popularingredients at their end. Purchasing in bulk also provides clients with associated packaging flexibility and costs savings.

For stock formulas our minimum order is 250 units per product, but we offer a one time only "trial order" for 100 units each of 3 products maximum.

Please fill out the contact form on the next page by providing the contact information for your company and the specific product(s) or type of products you are most interested in.